In a fitting end to the African American Public Address preconference, Rev. Bowyer G. Freeman and the members of New Saint Mark Baptist Church have invited Dr. Andre E. Johnson to speak Wednesday evening November 13, 2019, at 7pm. The church is located at 3905 Springdale Avenue in Baltimore, Maryland. Dr. Johnson has titled the message that evening, "Jesus and the Black Prophetic Tradition." The event is free and all are welcomed! 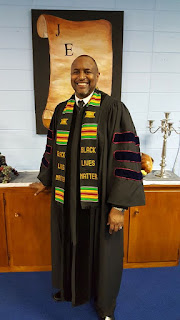 Dr. Andre E. Johnson is the Founding Pastor of Gifts of Life Ministries an inner-city church built upon the servant leadership philosophy. He is married to Lisa Jones Johnson, owner of 4 Peaceful Resolutions, a conflict mediation company. As a called-centered, mission group-oriented, servant leadership church, pastor Johnson leads a congregation that last year served over 8,000 meals, clothed over 250 persons, counseled over 70 individuals and families, and visited many sick and incarcerated people. He leads a congregation that focuses on the Word of God in the feeding of the hungry, healing and deliverance of the sick and oppressed, clothing the naked, welcoming the stranger, visiting the prison-bound, educating the unlearned and loving the unloved.

Dr. Johnson also leads a socially conscious and socially relevant ministry. He and G'Life have been at the forefront of much of the social justice activism in Memphis, Tennessee. Grounded in his faith and call to ministry, it is not uncommon to see Dr. Johnson leading, organizing, and participating in protests, vigils, marches, boycotts, and other direct social actions. His faith has led him to take part in efforts to reform our prison system, economic and poverty issues such as "Fight for 15" and living wage initiatives, voter suppression efforts, police misconduct, and brutality issues, and issues surrounding race. He was also one of the lead architects in #TakeEmDown901, the successful effort to remove confederate statues in the City of Memphis lead by Shelby County Commissioner Tami Sawyer.

In addition to his work in the church and community, Dr. Johnson also serves as an Associate Professor of Rhetoric and Media Studies in the Department of Communication & Film at the University of Memphis. He is also an affiliate faculty member of Christian Theology Seminary teaching in the areas of rhetoric, race, and homiletics. He formerly served as the Dr. James L. Netters Associate Professor of Rhetoric Religion and African American Studies at Memphis Theological Seminary and continues to serve as an adjunct professor teaching in the areas of Black Church studies, urban ministry, and rhetoric and religion.

We share with you the eulogy of Representative Elijah Cummings by President Barack Obama. The video and text are below.

Elijah Cummings came from good soil. And in this sturdy frame, goodness took root. His parents were sharecroppers from the South. They picked tobacco and strawberries, and then sought something better in this city, South Baltimore. Robert worked shifts at a plant, and Ruth cleaned other people’s homes. They became parents of seven, preachers to a small flock. I remember I had the pleasure of meeting Elijah’s mother, Ruth, and she told me she prayed for me every day, and I knew it was true, and I felt better for it. Sometimes people say they are praying for you, and you don’t know. They might be praying about you, but you don’t know if they are praying for you. But I knew Miss Ruth was telling the truth.

So they were the proverbial salt of the earth, and they passed on that strength and that grit, but also that kindness and that faith to their son. As a boy, Elijah's dad made him shine his shoes and tie his tie, and they’d go to the airport—not to board the airplanes, but to watch others do it. I remember Elijah telling me this story. Robert would say, “I have not flied. I may not fly, but you will fly one day. We can’t afford it right now, but you will fly.”

His grandmother—as Elijah related—and as grandmothers do, was a little more impatient with her advice. Your daddy, she said, “he’s been waiting and waiting for a better day. Don’t you wait.” And Elijah did not wait. Against all odds, Elijah earned his degrees. He learned about the rights that all people in this country are supposed to possess, with a little help, apparently, from Perry Mason. Elijah became a lawyer to make sure that others had rights, and his people had their God-given rights, and from the statehouse to the House of Representatives, his commitment to justice and the rights of others would never, ever waver.

Elijah’s example: a son of parents who rose from nothing to carve out just a little something, a public servant who toiled to guarantee the least of us have the same opportunities that he had earned. A leader who once said he would die for his people, even as he lived every minute for them—his life validates the things we tell ourselves about what’s possible in this country. Not guaranteed, but possible. The possibility that our destinies are not preordained. But rather, through our works, and our dedication, and our willingness to open our hearts to God’s message of love for all people, we can live a purposeful life. That we can reap a bountiful harvest. That we are neither sentenced to wither among the rocks nor assured a bounty, but we have a capacity, the chance, as individuals and as a nation, to root ourselves in good soil.

Elijah understood that. That’s why he fought for justice. That’s why he embraced his beloved community of Baltimore. That’s why he went on to fight for the rights and opportunities of forgotten people all across America, not just in his district. He was never complacent, for he knew that without clarity of purpose and a steadfast faith, and the dogged determination demanded by our liberty, the promise of this nation can wither. Complacency, he knew, was not only corrosive for our collective lives, but for our individual lives.

It has been remarked that Elijah was a kind man. I tell my daughters—and I have to say, listening to Elijah’s daughters speak, that got me choked up. I am sure those of you who have sons feel the same way, but there is something about daughters and their fathers. And I was thinking, I would want my daughters to know how much I love them, but I would also want them to know that being a strong man includes being kind. That there is nothing weak about kindness and compassion. There is nothing weak about looking out for others. There is nothing weak about being honorable. You are not a sucker to have integrity and to treat others with respect. I was sitting here and I was just noticing the honorable Elijah e. Cummings and, you know, this is a title that we confer on all kinds of people who get elected to public office. We’re supposed to introduce them as honorable.

But Elijah Cummings was honorable before he was elected to office. There’s a difference. There is a difference if you are honorable and treated others honorably outside the limelight. On the side of a road; in a quiet moment, counseling somebody you work with; letting your daughters know you love them. As president, I knew I could always count on Elijah being honorable and doing the right thing. And people have talked about his voice. There is something about his voice. It just made you feel better. There’s some people, they have that deep baritone, a prophetic voice. And when it was good times and we achieved victories together, that voice and that laugh was a gift. But you needed it more during the tough times, when the path ahead looked crooked, when obstacles abounded. When I entertained doubts, or I saw those who were in the fight start to waver, that’s when Elijah’s voice mattered most.

More than once during my presidency, when the economy still looked like it might plunge into depression, when the health-care bill was pronounced dead in Congress, I would watch Elijah rally his colleagues. “The cost of doing nothing isn’t nothing,” he would say, and folks would remember why they entered into public service. “Our children are the living messengers we send to a future we will never see,” he would say, and he would remind all of us that our time is too short not to fight for what’s good and what is true and what is best in America.

Two hundred years to 300 years from now, he would say, people will look back at this moment and they will ask the question “What did you do?” And hearing him, we would be reminded that it falls upon each of us to give voice to the voiceless, and comfort to the sick, and opportunity to those not born to it, and to preserve and nurture our democracy.

Elijah Cummings was a man of noble and good heart. His parents and his faith planted the seeds of hope, and love, and compassion, and righteousness in that good soil of his. He has harvested all the crops that he could, for the Lord has now called Elijah home, to give his humble, faithful servant rest. And it now falls on us to continue his work, so that other young boys and girls from Baltimore, across Maryland, across the United States, and around the world might too have a chance to grow and to flourish. That’s how we will honor him. That’s how we will remember him. That’s what he would hope for. May God bless the memory of the very honorable Elijah Cummings. And may God bless this city, and this state, and this nation that he loved. God bless you.